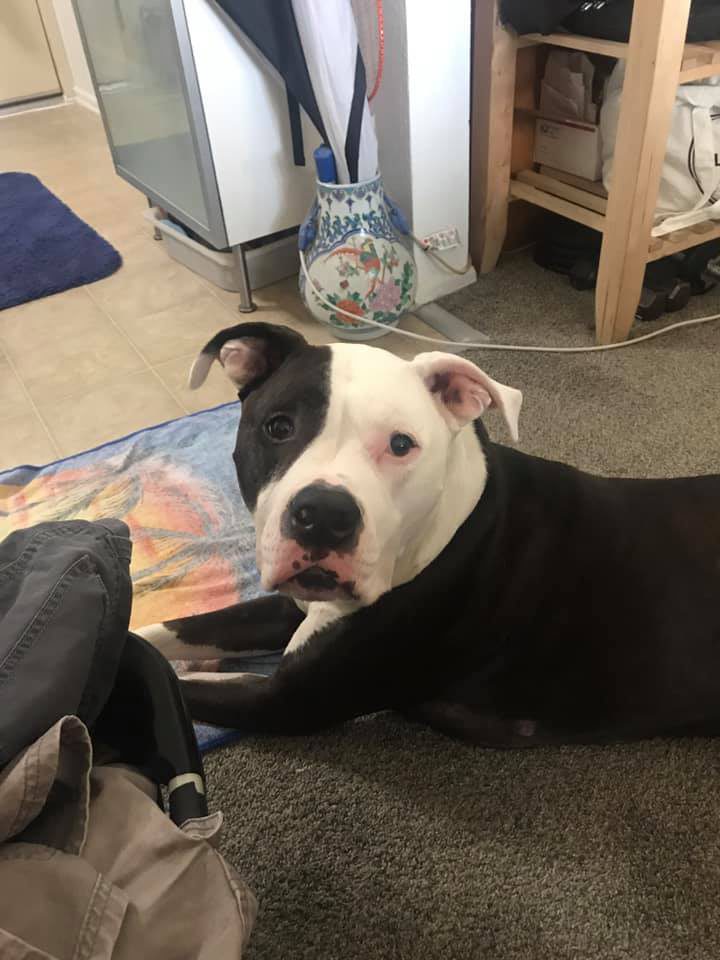 Pit bull Awareness Month is here. These beautiful strong brave dogs often have a reputation for being dangerous. Is it warranted? When discussed, the talk of Pit Bulls evokes a lot of passion from their enthusiastic pet parents, and from their adversaries. . I have never owned one, however, there is a lot of information and resources out there regarding ownership and proper handling. I personally know a lot of supporters owners and foster parents. It is definitely a special dog, that requires extra love, care, and respect. There are many myths and misinformation surrounding this type of dog. It is fair to say, they have been misunderstood for a long time. In honor of Pit bull Awareness Month, I think we should look at some reasons and try to debunk some of these myths.

They have a locking jaw, that once it bites down it doesn’t let go.

I have heard this since I was a kid. That alone made me feel afraid of them. But the truth is, that it is not true. They have big heads, and big mouths, but their jaw works like any other dogs. There are nearly no scientific studies regarding how much P.S.I for jaw pressure they may or may not have. There was a lot of scare tactics used in the 80’s that are not necessary today. It’s no wonder there are caution and confusion surrounding them.

If a Pit Bull attacks another dog it will surely attack me!

Throughout history, Pit Bulls were never intentionally bred for human aggression, only for bull baiting, ratting, and dogfighting. There is a history of trainers or breeders being encouraged to cull dogs that showed aggression towards humans. They are renowned for their strong bonds that form with their owners/pack. It sounds as though these pups have always had a difficult past. It is no wonder despite the rumors and myths, there is an abundance of Pit Bull advocates. Pitty’s are starting to sound like they have been treated as an underdog for some time. Although dog attacks of are serious, we know much more about these breeds today. If your dog DOES attack another dog, there is a chance to work with the dog, to retrain. There are options that can be explored, before being put down. It is extremely important for pit bull pet parent to really know their animal.

This Breed is genetically more aggressive by nature.

That could be said about other breeds as well. Isn’t every breed of dog genetically bred for something? Pit bulls have an unusual, sad, and reckless history of originally being bred to harass bulls. They were designed to bait bulls and sometimes bears into exhaustion or death. Their original purpose was to bring down animals much bigger than themselves. Fortunately in 1835 Britain Parliament ruled “bull/bear baiting” was animal cruelty. Once that became illegal, underground gamblers bred pit bulls with rat terriers. “Ratting” eventually turned into Dog Fighting. Pit bull terrier against Pit bull terrier. Were you aware Pit Bulls were used for fighting or baiting their entire existence? Maybe it’s humans that should be vilified?

“While a dog’s genetics may predispose it to behave in certain ways, genetics do not exist in a vacuum. Rather, behavior develops through a complex interaction between environment and genetics. This is an especially important consideration when we look at an individual dog versus a breed.-” ASPCA position on Pit Bulls

Genetics is not the end of the story. Based on research from the American Temperament Test Society, pit bulls have a passing rate of 87% or better and have for a few years. Read here for more about how they test dogs. It’s things like this that will give the breed a chance for a better reputation and a brighter future.

A Pit Bulls can’t be trusted around people or other dogs.

But that is a wholeheartedly a misleading statement. They are extremely loyal to humans and after the whole “ratting era”, they were bred to be excellent loyal family companions and they enjoy pleasing their pet parents. Unfortunately because of their history and genetic makeup, sometimes it IS best they are the only dog in a household. They can be taught to coexist with other dogs, however, it may take some extra work and training.

If trained from puppyhood, he won’t be aggressive.

“In some cases, Pit Bulls that were friendly with other dogs when younger will be unable to be with any dogs later in life. This is not common, but it is something that every responsible Pit Bull owner must consider. Having a Pit Bull neutered or spayed around 6 months of age can greatly reduce the chances of intolerance occurring later in its life”

Here is an excellent article from Badrap They are an excellent resource for prospective and current owners. take a look at the valuable information. since 1999 and shares a wealth of information and community outreach and adoption.

As a child, the Little Rascals was one of my favorite shows. I was intrigued to learn that Petey was a Pitty. Growing up in the 70’s-80’s I never made the connection. After more research, it is even more fascinating to me that since the 1800’s they have been bred specifically as working dog, or companionship. Like the German Shepard, they even served in the military. Read about Sgt Stubby the first Americana First War Dog from WW1. It is really fascinating to know how many of these dogs became valuable war heroes in World Wars I and II.

Have you learned more about this misunderstood breed ?

I love their muscular sleek look. Many friends of mine own these beautiful canines. I suspected my dog Ginger was at least part pit but never got confirmation. Hopefully, this has brought some new awareness of Pit Bulls, their history, and something to think about for their future. Like many breeds, it is important to research your new buddy and their likely temperament. It is easy to be swayed when nose to nose with these cuties. However, this unique breed needs extra care and concern.

“Pit Bull: The Battle over an American Icon – Bronwen Dickey’s “In this illuminating story of how a popular breed became demonized–and what role humans have played in the transformation–Dickey offers us an insightful view of Americans’ relationship with their dogs.”

It is Ironic that the Pit Bull was once first bred in the same country where they are now banned. They made their way to the United States around 1870 and have been loved by many since then. Please take some time and learn about this type

When adopting any animals it is important to know what you are getting into. No matter what breed you are thinking about it Is important to research personality, prey instinct, and breed history. It is easy to get swayed by an adorable face but remember a dog is a ten to fifteen-year commitment. Pitbull breeds are highly energetic, intelligent, strong pets. However, they also tend to steal hearts and become respectable family members. If adopting, you have a responsibility to help them live their best life. They have had a rough ride and we have heard of a fair number of irresponsible owners that have helped reinforce their bad boy reputations. That is sad. So For Pit Bull Awareness month, do a little research. I recommend this book if you are a reader (it is also available on audible if you are more of a listener like I am).