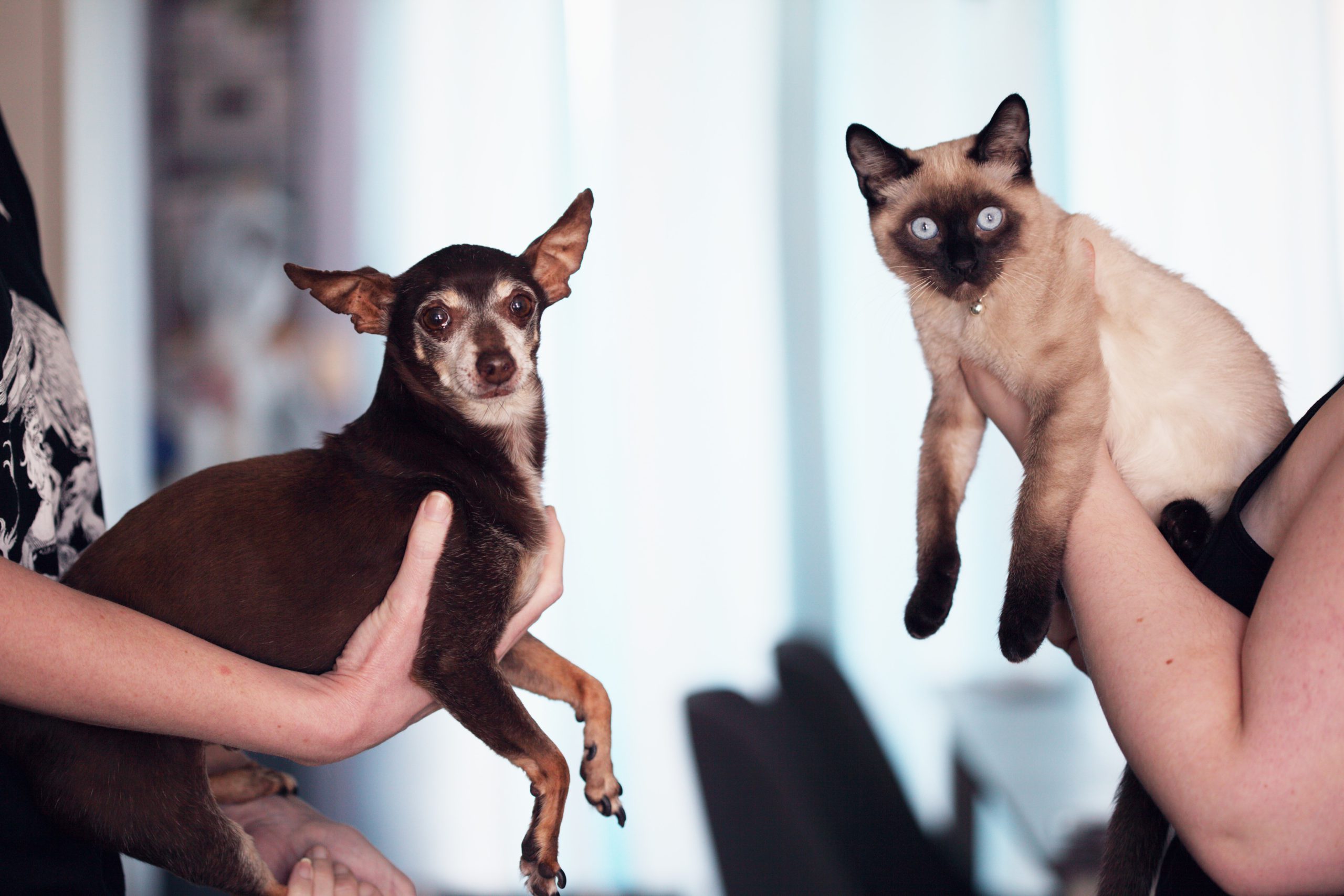 Well, MY cat’s smarter than a dog O.K., maybe I am just a proud pet parent. I live with both here at home. My cat has lived with me for about 10 years, and I have lived with my roommate’s dog for a little over three years. However, after spending the last eight months indoors with the pup on my left and a cat snoozing on my lap, the three of us have gotten a lot closer. Has it taught me anything about who is smarter the cat or the dog? Well, I do know they both the cat and the dog are clearly in charge of this household. As far as who is smarter? Keep reading as the answer might surprise you.

My dog is not my cat: owner perception of pets living in the same household.

Cats have a reputation for being aloof, and unaffectionate. Personally, I think they are just picky about who they love and trust. Who can blame them? Only recently in the last several forty years or fifty years have scientists begun studying domestic-cat/ human interaction.We are still learning every year. They have come a long way from keeping the vermin population under control in castles.

How smart are cats? Is it A myth?

The dog has been breed for domestication in mind for approx. 30,000 years. Cats have only been domesticated for closer to 9000k years. Dogs have been protectors, workers, soldiers, and family members, cats, on the other hand, have been idolized by civilizations like the Egyptians.

We are still trying to discover how intelligent cats really are but we do know they form tight bonds with their humans, just like their canine friends. I have always said that Pizza cat and I are bonded. He cries when I’m not home in time, and he spends a ridiculous amount of time trying to groom me. Cats even try to speak to us, with chips and meows and other forms of body language. In fact, cats don’t speak to each other verbally, yet they have learned to speak their mind to their humans.

Cats are not motivated to please people in the same way dogs are, so it is harder to test their intelligence. Cats do not make good test subjects however, they can do all the same things as dogs. And many of them even choose to do so, on a good day.

Why do cats appear smarter than dogs?, NOT…

Despite their occasional apparent lack of interest or concern, the cat is a master of procedural memory and shows excellent cognitive ability. When cats seem to be staring at you they probably are! They are excellent observers and learn by watching. My cat is defiantly clever and always remembers where he watches me put his treats. When I had an older cat he was very instrumental at “teaching” the youngster the necessary manners, like using the litter box. (He also taught Pizza to drink from the toilet. Annoying yet extremely clever that Ricky still had that habit after months with me, also clever the kitten followed suit.)

Because cats are excellent hunters, we can conclude they have “object permanence” If they chase prey behind a shelf cats are tenacious and can deduce it is is still there and will wait. A dog can be tricked, by humans, a blanket, and a doorway. Alas, cats just are not good test subjects. When they are done with the testing, they are DONE!

They prefer to live on their terms (maybe there is lesson in that?)

Dogs are Smarter than Cats then ?

However, four years later new studies suggest the opposite!

“And, perhaps most relevant to pet owners, the researchers found that dogs have more neurons than cats, or even hyenas, which have much larger brains than dogs. Hyenas are, in fact, more closely related to cats than dogs. Specifically, dogs have roughly 530 million neurons, while cats have about 250 million, according to the study. Humans, by contrast, have about 16 billion each.”

Clearly, there is more research to be done to answer this age-old question, Are cats are smarter than dogs?

We do know that dogs have bigger brains, it is undetermined if that equals a higher intelligence though. Scientists suggest over time dogs’ brains grew because they live in a social structure for so long, whereas cats have not. As we continue to domesticate, spoil, and share our lives with cats and dogs, I would imagine they are continually evolving as well, and that complicates things. Dogs still make great companions, where cats do in their own way, it is a different relationship.

Both cats and dogs have an excellent sense of smell yet, Unlike cats, dogs are able to respond to sweetness, thanks to their different genetic structure.

Both cats and dogs have been T.V. starts proving they can both be taught tricks and commands. In either case, personality may play a bigger part than intelligence.

While almost all pet parents I know like to praise the intelligence of their fur baby, the truth is we just don’t know if a cat or a dog is smarter. Comparing cats to dogs is a lot like comparing apples to oranges. Although they have common attributes, they do think differently. It just isn’t a fair comparison. Between temperament and breed and individuality, it is fair to say both are smart in their own way. Both are nice to spend time with and snuggle with. Fortunately, we as humans are smart enough to keep pets around.